Ones Ferrari might do zero to 60 (MPH)  in 2.8 seconds.  Precision playback systems achieve zero to infinity in a blink......that's performance.  Well, you get the idea.

At Leader, we have achieved tour de force levels of achievement in the science necessary to reproduce the wide spectrum of recorded sound found in music and wide dynamic range motion picture sound.

The effortless grace in the overall performance transcends merely talking about the “sound of the sound system”.  The musical dimensions unfold while creating multi-dimensional acoustical images just as occurs in real life...in real time...listening and enjoying real people making and performing the art of music 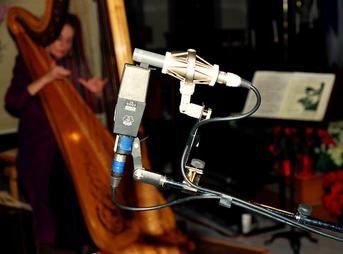 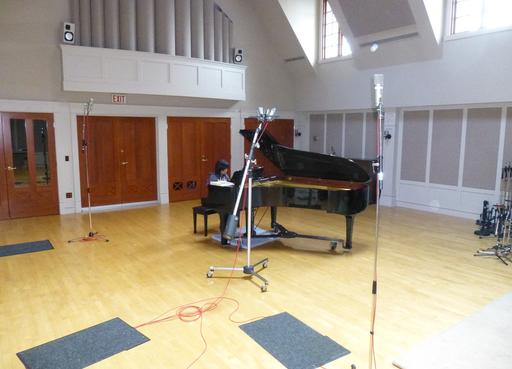 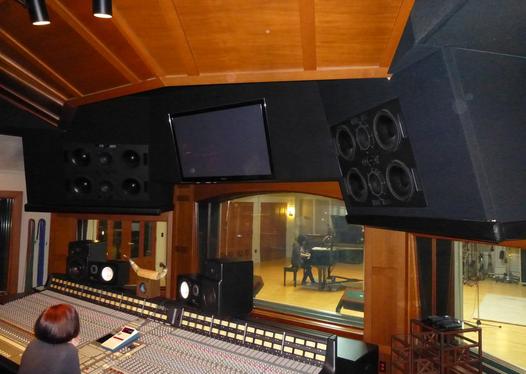 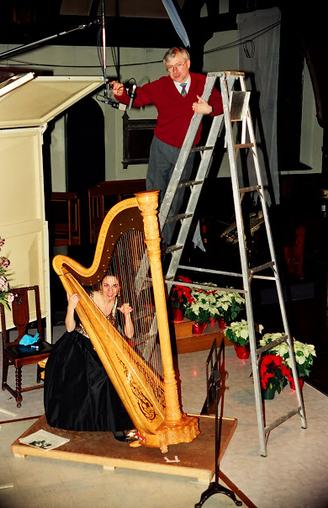 ​Michael Leader, with Concert Harpist Rita Costanzi, adjusts overhead MS microphone array to capture the multifaceted dimensions of the harp.  It is unusual to position microphones above the harp as large studio booms are required amounting to additional work!  However, the benefit apart from much superior sound is the complete elimination of pedal noises which is so prevalent when microphones are positioned low to the floor.

Illustrated is the microphone array consisting of a Studer/Schopes MK41 Hyper CardoidCapsule and SKM5 body.  The large AKG 414 is in "figure 8"  bi-directional mode.  This is a preferred stereo technique to capture the overall balance of the instrument together with the space. The overall width of the stereo stage can  be manipulated in post production.

An identical arrangement was used for the vocalist which captured both a very stable frontal image together with spatial ambience in  which the vocalist was performing.

In the quest to reproduce the ideal sound and its dimension in any space other than the one, such as the control room, in which the event was monitored is an exceptionally challenging ordeal.  Given the world's absolute of the absolutes in terms of the acoustical transducers (speaker elements) that form a completed speaker system, there are in scientific terms will be some diversion in the transfer function.  This is a simple fact of life, and no magic black box will change this fact.  However, it is indeed possible to achieve exceptional degrees of success in the creation of an ideal playback experience away from the studio.

Leader Acoustic Labs and Leader Sound Technologies Corporation has conducted extensive R&D into the requirements to achieve technologically advanced playback systems. Well produced recordings across all musical genres will contain spatial elements which will reveal elements of elevation (an uncanny height component), depth along the front to back Z axis and a left to right sound stage that extends beyond the confines of the left and right speaker systems.  These elements are also highly desirable when designing multi-channel front main movie screen channels (Left-Center-Right) as applied in cinema.

The images shown here all exhibit a similarity in the playback performance.  Certainly room volume may vary considerably.  However the ability to reproduce the minute cues and elements captured during the recording in addition to the overall ability to achieve high sound pressure levels beyond off-the-shelf hi-fi systems the inherent reliability of such systems in addition to the system almost becoming invisible is the hallmark of our dedication to this art.......the art form of music.

Illustrated below is but a small example of applications and systems manufactured by Leader Acoustic Labs.  Click to expand image.